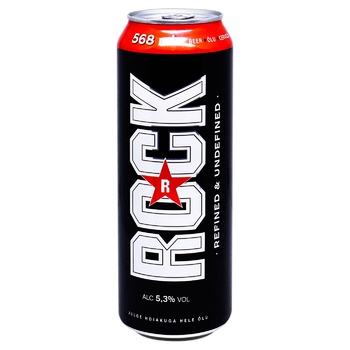 Can only be paid by cash

Rock is a sharp beer that was first brewed in the spring of 1994 as a special beer for a music festival that was taking place at the time. Hardly anyone remembers the festival anymore, but Rock lives on. A good thing will not go unnoticed by the general public.

Rock has character, Rock has power. Compared to other lagers, Rock has more than average strong hop flavour, strength and not a drop of blandness. A beer for serious beer drinkers who won't settle for anything less.

Fender Stratocaster or Gibson Les Paul? Mustang or Challenger? 1970s hard rock or 1980s hard rock? "Kill 'Em All or The Black Album? Chopper or Streetfighter? Word or power? Black or white? If you've philosophised on these topics, you're ready, welcome to the world of Rock.